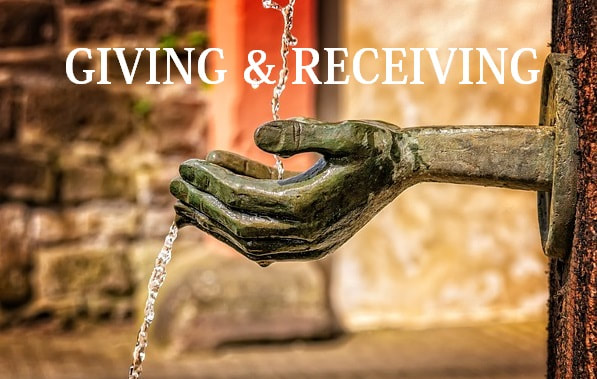 Pearl 63
I let every day be the day that celebrates the resurrection of consciousness into eternal awareness.

FYI: Scroll through the transcriptions for pertinent links to websites and videos, and to access the rest of this course
​
13th Grand Secret of Spiritual Mysteries: Giving & Receiving, Lesson 1, Pearl 63

Blessings unto the heart and the mind of your beings. I am Lady Master Natasha.

Beloved Ones, it is with great joy that We, The Council of 8, interact with your beings in this manner on this evening that you call late summer in July 2018, we begin the 13th Grand Secret of Spiritual Mysteries, and this, Beloveds, is another turning point, one might say.

You upped the game, as it were, with the 11th Grand Secret of Spiritual Mysteries, Game Changers, and now with the 13th Grand Secret you are entering into the initiation realm that many avatars and masters who have come before you have studied in, recognized, and left the symbolism for you to recognize.

Perhaps if you had not studied and learned the power of symbolism to this point, you might not recognize the importance of 13, but if you have not, you will know it intuitively because it has been falsified on your planet by turning it into a superstitious number. For many places even today, such as hotels, there will not be a 13th floor, and Friday the 13th, in your calendar that chops up time and creates holidays, as it were, is supposed to be a day of danger and worry and fear.

The number 13 was associated with witchery, voodooism, and the black arts, as it were, but that is because they understood the meaning of its power, and those who might wish you, if indeed such a concept exists on earth, to not know your power whether it is you or it is a group, would tamper with the thought forms and the definitions associated with the number 13.

What is not yet known upon your planet is that for conception to take place in the human body, it requires 13 sperm, not one. One is use for the fertilization to actually take place as it marries, so to speak, with the egg, but it requires the energy vibrations, certain frequencies that are within twelve sperm, to create the opening that the 13th might enter. Without this symphony occurring within the human being there is no conception, and there are many things that can interfere with this.

Thirteen is also very well known in the world of Christianity, for there were 12 disciples, as it were, and Master Jesus. It has been suggested that each disciple represents a quality that the consciousness must live through or master in order to become the Christed awareness, that is the leading of the Self. The Christed awareness is the wholeness of the Self,  when all of the aspects of the Divine aspects of Self are united.

Thirteen is a number of leadership. It is a number of harmony within the self, knowing: That is what the message that Master Jesus left behind on planet earth was: love in a way that had not ever happened before, and love in this way, when it moves into the self, allows conscious immortality and allows conscious physical immortality for which there was not yet the blueprint, as it were.

You are beginning to see the power of the number 13. Look at your calendar. It can only hold 12 full moons and yet you have thirteen. When two happen in one month you have a terminology for it. You call it a Blue Moon, but those who gave it that nomenclature did not recognize that electric blue is the color vibrationally associated with Christed Consciousness. There you even have Nature, as it were, reflecting to you the power of the 12 + 1, the 13.

If you all look at your culture as it stands now, 13 is the beginning of leaving behind childhood, yes? You live 12 years, it is not when you reach 10 and become a double digit figure of age as it were, it is for some reason the arbitrary 13. That is when you are called a teenager simply because ‘teen’ was added to each of the names of the numbers. Thirteen, the age, represents a shifting of consciousness within the being.

After 12 years you have had the opportunity to interact, not only with earth and those on the planet earth, but to interact within yourself and to meet many of the messages that your soul will want you to understand later in life; as well as...if you have not had caretakers that carefully guided you through your 12 years, then you will have all of the self-destruction and the falsehoods that are attached to it as well so that when 13 arrives you are ready to take your own leadership into your own awareness. You are ready to matrix, as it were, with the world around you.

Each of you, when this particular introduction to the 13th Grand Secret is over, might be intrigued to go back over your life and look at what celebrations, if any, occurred in your life when you turned 13. What did you think of yourself? What did others think of your being? Where were you? What was your life like? Etc.

You might also, if you are so inclined to enter meditation, ask yourself for each year of your 12 years of life, when you were first living life, if what you took away from that year could be reduced to one word or one sentence that has influenced you and limited you the most, what would that be? Put it in your journal.

Conversely, ask yourself if in that same year there was one thing that supported you the most or created who you are now that you love in yourself, what would that one word or that one sentence be?

Why were you receiving?  Because there was nothing that prepared you, at your birth, for what you would receive. The sounds. The smells. The touch. Some of it was overwhelming for a physical self that had spent time within the fetal journey rocking in the waters, and being in relative safety, and being relatively soundproof. Not that you could not pick up vibrations and not that you could not pick up feelings because is that not what water is a conduit of? Water is a conduit for thoughts and feelings, and so they come roaring into your being but not necessarily your ears.

When you are born you are receiving, receiving sounds and impulses until there is sensory overload. You wonder why infants need to sleep for about the first six months that they are on planet earth? They are in sensory overload. They take what they can take in and then they are asleep.

These beautiful little babies, that everyone calls such good and wonderful babies, they sleep all the time. They are just so wonderful. They are on overload! The babies that are noisy and rambunctious are learning more quickly how to interact and create something that counteracts the overload, and yet they may carry this same modality with them into later years of life.

Those infants who experience what is called crib death: there are a number of reasons for crib death but one is the overload on the noisy planet of earth. The sensorial overload is too much, and it basically burns out the system. It is just like if you blew a fuse in your musical systems where you are listening to sound that is so loud that your speakers 'poof' and you can hear nothing any longer. It is an overload, a form of overload.

Each of you, Beloveds, have grown up, as it were, and you have created your own methods for dealing with overload. This is something to ponder. We will not touch on them individually, at least not in this moment, but if there are requests at some point we may at the end of all of the Pearls of this Grand Secret offer an evening where we interact verbally with you in this manner as a group and offer each of you the information of if you still have manners and ways of dealing with overload that do not help you truly deal with it, but you must remember to do the asking. That will be available at the end after we have had all of our sessions of the 13th Grand Secret.

HOW "GIVING" COULD HAVE FORMED AN UNNATURAL HABIT

Let us say that you notice in your life that you are rather addicted to food. You eat it very quickly, and you know that you do but you cannot quite seem to make yourself stop; and you have a habit of looking in the pantries or the refrigerator, you know you will find nothing you want to eat but you might. You look anyway whether you are hungry or not, and you may have habits built up around your eating, but the biggest thing that you notice is that you eat faster than you want to, and it is hard to make yourself not. You do not chew your food as long as you wish you did to masticate it into a liquid before you swallow it, and you tend to eat more than you wish you ate, and you are full and you are usually uncomfortably full. This, Beloveds, can be a perfect example of the giving that you received as an infant.

If you have this situation in your life, if you close your eyes and think back to when you are little, it is likely that you will remember food coming at you on a spoon and trying to be forced as it were into your mouth. “Open wide!” and not given much time. The food goes in, and then you are supposed to swallow it very quickly so whoever is feeding you can get done with the feeding, and so you learn that you are supposed to be miserable when you eat, and you learn that you are supposed to eat really quickly because it pleases your caretaker. You are giving, you are learning what to give in order to be accepted.

If you throw away your calendars, Beloveds, if you let:  then you will begin living your life as though it were a vacation all of the time.

Every day is a holiday, yes?

On that idea, we bring this particular session to its beautiful ending, and we invite you from this Thursday until next Thursday to become aware in this week of giving in a way that you have not thought of it before.

Namaste unto the heart and the mind of your beings. So be it.