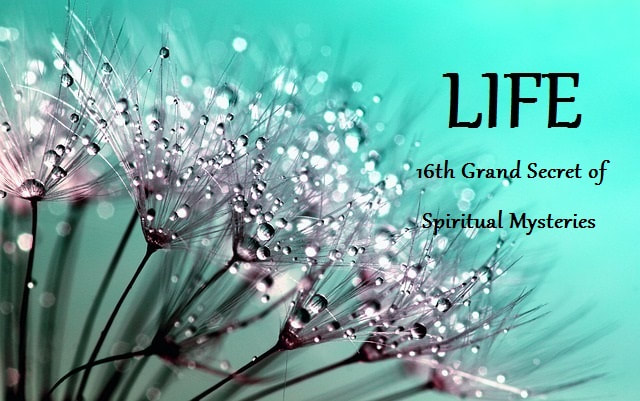 Pearl 75
As I separate myself from the collective illusion external to my being, I become more entered within and more aware.

Blessings unto the heart and mind of your beings. I am Lady Master Natasha. Beloved Ones, We, The Council of 8, greet you this evening with the 16th Grand Secret of Spiritual Mysteries, that which is called Life.

You would think, as it were, that you, as Spirit in human form, living life, would understand all there is to know about it, and that to have teachings or sessions or interactions regarding life itself that you have been living since you were born would be redundant, so to speak. We trust that as this Secret completes all of its Pearls you will have a different perspective, as it were.

We begin this evening with interaction. To begin with, it is always important that one understands the meaning of the words that one is using, and in this case, the meaning of Life is very large and has many definitions. Before we define it, we wish to hear what metaphors and what similes, as it were, you have heard about life or that you believe about life. Either or both.

For instance, life is a burden, or you may say something like, life is like perpetual  sunshine.

We speak of direction.

What control do you have over your life?

How do you know within your life and the living of your life that you are making decisions that are wise decisions? How do you know when you are living that which comes from the heart of your being and the wisdom of your being or that you are living that which is simply all of the repetition that you have lived over and over and over again?

On your planet now, in this moment, as we speak, in this month you call November, in this year you call 2018, there is a great deal of panic in the consciousnesses of your planet. Panic because the majority of those on your planet feel they are being guided and directed and forced to live lives that are not of their making, that are not of their choice. In this panic they are desperately seeking choice. Where do I go? How do I live? What choices do I make?

It is because there is repetitive memory within all of humanity in this moment. Repetitive memory of what has come before when life has reached this crescendo of panic, and that is what is increasing the panic on your planet. Life has a memory, and it remembers repetition and in the repetition it feels powerless. It feels unable to make a difference, and thus it is, that this evening there were those who shared with you their perspectives on how you, as a collective might, make a difference on the planet. (An earlier group discussion among students present for the recording.)

On planet Earth, there is one major repetition that has occurred over and over again and that is destruction of not just the planet herself but the life forms that are on the planet, not just extinction but eventually, destruction.

We say unto the hearts and the minds of your beings in this moment that you allowed yourselves to take on these ideas so that you, to be of assistance to the planet, to Earth, and humanity, might collectively and individually, continually reduce the fear, the worry, the anxiety, the anger, the jealousy, the resentment, the negativity that created so many mass destructions of this planet.

During this time when you have been wondering if you would ever wake up, you have been clearing, as it were, those frequencies and energies and thought forms and feelings that have been running rampant on planet Earth for so long. You have come as a "cleanup crew", as it were, but with great wisdom and understanding and compassion and daring, as it were, for always there was the knowing that you might be stuck in the mass morass of negativity.

You, however, are each rising to your personal heights. You are rising to the place within yourself where you are realizing you are not the collective illusion that is external to your being, and as you recognize this, you are separating yourself from that influence, and as you separate yourself from that influence, not only do you become more centered in your own being, you become more aware.

Each of you can say you are not who you were years and years and years ago. Each of you can say that you have moved through and passed beyond so much that you thought was limiting in your reality, that was powerlessness and hopelessness in your reality. You have moved beyond this. Each of you hearing these words is able to know within yourself you have a strength and a confidence that has reminded you who you are and why you are here and what you can do about it.

You are looking to work collectively as a group. Indeed, Beloveds, you remember that unless you ask, those who are not of your planet cannot assist you, for you are a free will planet, and we cannot usurp your free will, but the moment you open the door, we are there with energy, with suggestions, with help, with assistance. We are there to help you, not only to keep yourself free, as it were, from the limitations that the illusions of life cast upon your experience of it. We are also there to help you re-remember your strength, your purpose, and to lend energy and support and to be a participant, as it were.

When you are counting "your 13" (see 13th Grand Secret), as it were, The Council of 8 is indeed one of those 13, and if you are asking, we are granting our permission as well and our support as well to engage in that which you would determine is the direction you wish to take.

​How does one know at this moment in time? How does one separate oneself from the fears of the collective consciousness to one’s own inner truth?

There are many ways and you have been learning them over the years, but we will reiterate this:
It is that simple. It is the remembrance within that is where the power is, and even if the outer world says to you such and such is going to happen, why would you believe it? Why would you own it if it is against your truth? This is where you must take your personal stand.

That is the introduction to Life, Beloved Ones.
​
Namaste unto the heart and the mind and the Souls of the spark of your beings and the collective consciousness that you are. As you collect yourselves as a consciousness that is aware and you interact with one another in this awareness, you take away power from those who are not awake and not aware.

Namaste unto the heart and the mind and the Soul of the energy of the truth of your being.
Take Me to Pearls 76-77